Back to Our News Return Home

The founders of Old Wives Ales all share an appreciation and passion for good beer and brewing.

Justin Spicer, co-founder of Old Wives Ales and also the Merri Mashers, discovered his interest in home brewing when a friend invited him to a “brew on premise” venue. He learnt the basics in brewing that night which ignited his passion for craft beer and brewing. Justin soon learned that there were several home brew clubs around Melbourne, however there were not any in the Northern Suburbs. It was this realisation that inspired him to become the inaugural president of a new home brew club two years ago. Merri Mashers now has over 75 members and is one of Victoria’s biggest home brew clubs today.

Justin has now taken his passion for home brewing to another level, joining with fellow Merri Mashers, Shannon, Mattias and Nathan in October 2015 to start up Old Wives Ales. This collective gives these self-proclaimed beer nerds a way to bring their beery creations to the world on a grander scale. Justin explained that they are gypsy brewers because they don’t own their own brewery…yet. They work with some great breweries all over Victoria to produce their beer. The freedom they have as gypsy brewers has allowed them to push the boundaries in their recipe development and always put flavour first.

They recently joined us at The Craft & Co. to brew their ESB (Extra Special Bitter) on our 10 hL microbrewery. Brewed with Viking Malt from Norway and a mixture of both old and new world hops, the ESB is shaping up to be EXTRA! bitter. Look out for it on tap in early September.

The Old Wives Ales crew have so far released a number of keg-only batches and have been on tap throughout Melbourne and Regional Victoria. Just this week they released their first packaged beer – Hair of the Dog is an XPA (Extra Pale Ale) that wears a size thirteen shoe. It’s big, bold, tropical and very easy to drink. Keep an eye out for it at your local bottle shop. 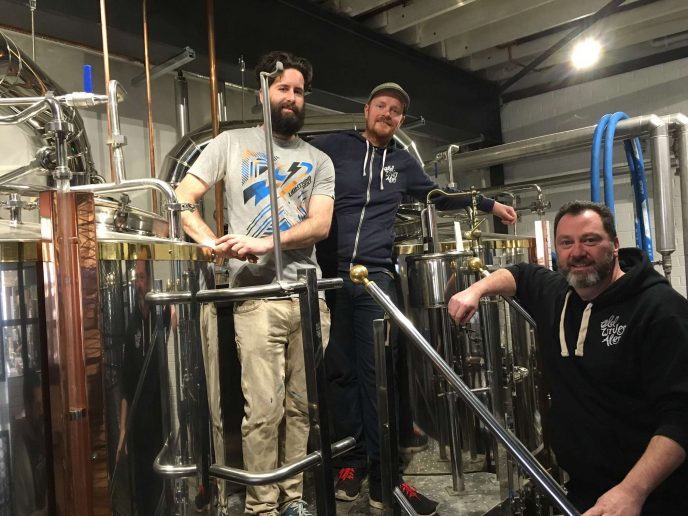 At The Craft & Co, we are the proud owners of a stunning 10 hL microbrewery from Italy (supplied and installed by FB*PROPAK) and now able to boast winning a Silver Medal at the recent Craft Beer Awards for our first-ever Pilsener. We’ve also recently brewed a Stout, Pale Ale and Lager off this onsite brewery, with many more styles to come! The Craft & Co brewery is used to educate the public on how craft beers are produced, create amazing beer in collaboration with some of the industry’s most interesting brewers.

Artisan producers, craft brewers and homebrew clubs are welcome to use our micro-brewery to create craft beer which the opportunity for their creation to be supplied on tap on premise. For more information, contact: info@thecraftandco.com.au